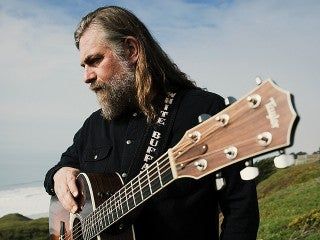 Working under the apt nameplate The White Buffalo, singer/songwriter Jake Smith has resolutely charted his own single-minded course for more than a decade. An imposing figure with a voice to match, a resonant, roughhewn baritone, Smith writes about rebels, outsiders and troubled souls battling their way through the obstacles life throws in their paths, telling timeless tales generally set against recognizably contemporary backdrops. “I skirt the line between good and evil in a lot of my songs,” Smith points out. The hard-bitten themes and performances that have defined his career led the producers of Sons of Anarchy to grab six of Smith’s songs for use under scenes in the similarly edgy series, while The White Buffalo’s “American Dream,” written specifically for the 2013 feature film The Lone Ranger: Wanted, appears on the soundtrack album alongside contributions from fellow iconoclasts Lucinda Williams, Dave Alvin, Iggy Pop, Ben Kweller, The Aggrolites, Shane MacGowan of The Pogues and Iron & Wine.

Smith didn’t set out to write a concept album as he laid the groundwork for what would become Shadows, Greys and Evil Ways (Unison Music Group, Sept. 10). It’s just that the songs that were coming out of him—or through him, as the case may be—led him to that revelation. As the narrative arc began to coalesce, Smith went with it, shaping the universal story in modern dress of Joe and Jolene, a pair of youngsters thrust together by chance, forging a deep, emotionally hotwired relationship that would at once haunt and sustain them throughout their lives. The narrative in turn led Smith to tackle the big themes of human existence—sin and redemption, faith and doubt, mortality and the possibility of an afterlife—that have obsessed artists and philosophers alike from time immemorial. But here, these universal themes have led Smith to take on charged modern-day issues including post-war trauma, the economic plight of American families and the gun-control debate with evenhandedness and a refreshing absence of judgment. All of these thematic vectors exist in the service of a gripping story told uncompromisingly and compassionately, each of its linked songs coming across with the ring of truth.

“I look at the whole thing as a love story,” says Smith. “The beginning is their meeting, and because of his need and want to support her, he goes off to war, which starts his downward spiral. But he later realizes that his only chance for redemption and hope is the love of this woman, who has always stood by him regardless of the crazy shit he keeps pulling and the bad choices he keeps making.”

In the story, Smith poses a dual vision of salvation: romantic love on the one side, the pearly gates on the other. “And it goes unanswered,” he acknowledges. “I know a lot of the questions in life, but I don’t know the answers. At points on the album, it’s evident that, if Joey doesn’t denounce God, he doubts that he exists. In ‘Redemption #2,’ he says, ‘I don’t believe that there’s a heaven to go/But I must get this evil out of my bones and my soul.’ But then, at the end of his life, as many people probably do, he starts to think about these questions and the possibility of salvation, and if there is a heaven, does he have any right to be there?”

Throughout the process of writing the material for the album, Smith found himself straddling the archetypal and the particular. “It could be any man in any war at any time,” he says. “Because it’s a universal story of young men going off to war, for the right reasons or the wrong reasons, and things not going as planned and coming back. But then, I found myself putting in some details that allude to the fact that it’s a desert war, like the wars I grew up with. So I think of him as an American serving in Iraq or Afghanistan, because that’s what I’ve seen through my lifetime.” Although Smith says he’s not at all political, he’s acutely aware of what’s going on around him. “I feel like I’m a patriot, but at the same time I’m disillusioned by a lot of what’s going on in this country—you have to be completely blind not to see that it’s fucked up. But I still love it.”

One of the most striking aspects of Shadows, Greys and Evil Ways is Smith’s nuanced portrayal of Joe’s progressive transformation through the stages of his life. “Initially, he’s this excited boy,” Smith notes, “and then, when he goes into his dark path, my vocal delivery changes. As he gets older, it changes again, to a sort of croon, almost. And I don’t know whether I did it consciously or not, really. Sometimes it’s first-person, sometimes it’s third person and other times it’s a blend of the two. It gets super-heavy in the three-song sequence of ‘Joey White’, ‘30 Days Back’, and ‘The Whistler’, and hopefully the listener will get some of the chaos and insanity of what he goes through.”

Another defining element of the album is its juxtaposition of immense power and strength on the one hand—not surprising considering Smith’s looming presence—and surprising sensitivity on the other. “I definitely commit to whatever ideas and emotions are in any given song,” he acknowledges, “and try to make every word count—I want to take the listener somewhere. What makes this album significant for me is that it works as a whole, but the individual songs stand up as well. I’m very proud of it.”

Shadows, Greys and Evil Ways, like its predecessor, 2012’s Once Upon a Time in the West, was produced by Unison Music co-owners Bruce Witkin & Ryan Dorn. It features Smith’s longtime rhythm section of drummer Matt Lynott and bass player Tommy Andrews, with a supporting cast that includes Rick Shea (Dave Alvin) on pedal steel, Mike Thompson (Eagles, Rod Stewart) on keyboards and legendary drummer Jim Keltner on “Don’t You Want It.” Also playing key roles are Jessy Greene, whose violin and cello are meant to represent the character of Jolene, while Joe’s darker moods are deepened by the baritone guitar of Witkin (who plays a variety of instruments on the record).

Born in Oregon and raised in Huntington Beach, California, Smith spent his childhood years listening to the country music his parents loved. As a teenager, he naturally gravitated to the aggressive sounds emanating from that punk-rock mecca before getting turned on to Bob Dylan and John Prine and picking up a guitar for the first time at age 19, whereupon he immediately began to write his own songs. All of these elements helped shape, and continue to coexist, in his music—the storytelling impulse of classic country, the aggressiveness of punk, the visionary singularity of the definitive singer/songwriters. As The White Buffalo, he stands as a true original, presenting his singular vision with conviction and immediacy, and leaving an ever-bigger footprint on the American roots-music landscape.


THE NARRATIVE ARC OF SHADOWS, GREYS AND EVIL WAYS
The story begins with “Shall We Go On,” which introduces the male and female protagonists, Joe and Jolene, who meet by chance and fall desperately in love. In the first test of their connection, both sets of parents disapprove, in large part because of their differing religious beliefs, setting the stage for both an enduring love story and a lifetime of conflict and struggle. The young lovers escape their small-town existence and the judgments of their parents and community in “The Get Away.” “Behind us the damage is done, no one can erase,” they admit to each other. “Love has no ending, just a resting place.” But Joey carries a huge chip on his shoulder, and he swaggers defiantly through the course of the first-person “When I’m Gone,” impetuous and irresponsible, before reality intrudes—he has no means of providing for his new family. That need, along with the desire to prove his worth to his parents and himself, leads to a fateful decision, as he enlists and goes off to fight in a war halfway around the world.

The following “Joey White” fast-forwards through Joe’s military experience: enlistment, boot camp, the chaos of combat, taking a bullet and being sent home a radically changed man, with “demons in his head, for life.” “30 Days Back” finds Joe back home, confused and disillusioned, struggling to adjust to civilian life. “They built me strong, made me numb and mean,” he tells himself ruefully, “Shipped me on home, one killin’ machine.” Battling his demons through the harrowing course of “The Whistler,” he kills again in a moment of bloodlust. He’s devastated by his murderous act, vowing for the second time never to take the life of another man. In “Set My Body Free,” Joey begins his long search for redemption in all the wrong places—before it hits him in a fleeting moment of clarity that the answer may lie in grasping at something pure and unsullied.

Still searching for some glimpse of light in the lingering shadows of his life, Joey seeks forgiveness and a way to cope during the course of “Redemption #2.” Telling himself, “I must flush away what I done, what I seen,” he realizes his only hope for redemption is the love of his woman. “This Year” follows Joe through the seasons of a calendar year. As spring turns to summer, he experiences a growing sense of normalcy and light, but as the natural cycle continues and fall darkens into winter, his anxiety and doubt return, and he reverts once again to the increasingly faint hope that “Maybe I’ll get better, maybe I’ll be different/Next year.” “Fire Don’t Know” addresses the concept that people have an irrational tendency to blame inanimate objects for their own actions and problems. “Bullets and steel, they don’t think they don’t feel,” Joey reflects. “Well they ain’t got no plans to shoot down a man… Money don’t know I got mouths to feed/But I do.”

In “Joe & Jolene,” the protagonist loses his job and starts drinking and Jolene leaves him. But when he makes a final plea—“Joey rolls up his sleeve, I still got your name tattooed/The ink’s faded and grey, but it’s still serenading you”—she’s moved by the depth of his need for her and returns home to him. Years pass before we encounter Joe, older and reflective, in “Don’t You Want It,” asking himself, “Where the hell did I go wrong?” but realizing he has a chance at redemption by way of his enduring love of Jolene. Following the instrumental “#13,” we find Joe near the end of his life in the concluding “Pray to You Now,” looking back on his “shadows, greys and evil ways” and pondering the possibility of an afterlife. “I’d pray to you now, but I don’t know how,” he offers up into the Great Unknown. “It ain’t in my heart, is it too late to start?” Joe’s story, and his life, end with these questions tantalizingly unresolved.