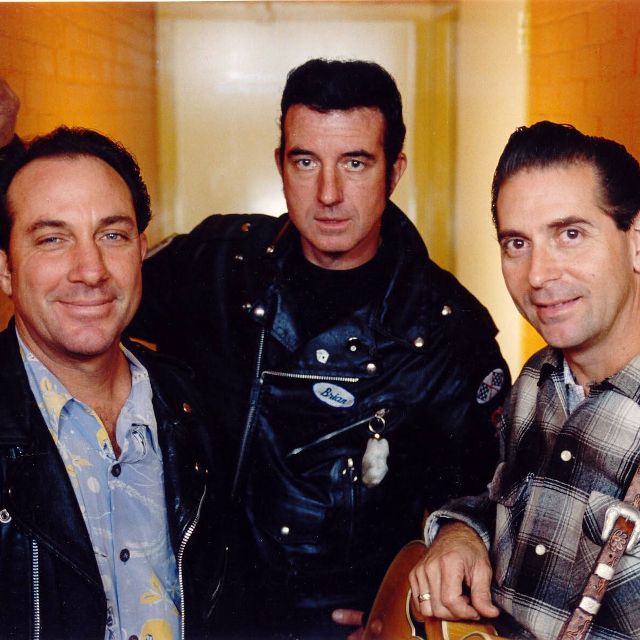 San Diego's preeminent blues & rockabilly band are back in their prime form to showcase the greatest hits from their 9 studio albums!

This event has been rescheduled from August 30th. All tickets purchased from the August 30th date will be honored.

Ticket Price: $20 advanced / $23 day of show / $35 reserved loft seating (loft seating is available over the phone or in person at our box office)

The Paladins from San Diego California are the preeminent blues/rockabilly band in America. Founded in 1980 by guitarist Dave Gonzalez and bass player Thomas Yearsley, they have recorded five singles, nine full Length studio records, and three live albums. Along the way they built a solid reputation as one of America's hardest working and best live bands.

The Paladins helped pave the way for the Rockabilly craze of the early 1980s. Their tagline at the time was "Western & Bop", as they played a combination of rockabilly and vintage country together with a blues groove. Their first LP, The Paladins, was released in 1986 and was produced by Kim Wilson of the Fabulous Thunderbirds. They followed that up with Years Since Yesterday, released on Alligator Records in 1989 and produced by Los Lobos' Steve Berlin and Mark Linnet. When Let’s Buzz came out in 1990 the band was firmly planted as a headliners in showcase music clubs across the country and in Europe. The band also established themselves at numerous festivals, sharing bills with the likes of Stevie Ray Vaughn, The Fabulous Thunderbirds, The Blasters, and Los Lobos. Let's Buzz, “an invigorating blend of rockabilly, blues, rhythm-and-blues, and country," was recorded in the Los Angeles studio of 1970s soul star Leon Haywood, and is their largest selling record to date. Since that time six more critically acclaimed albums have come out. Most notably, their 1996 live album Million Mile Club, which fittingly marked the band’s millionth mile traveled on the roads of the USA

To their many fans worldwide, the Paladins appeared to have come to an end in 2004. That's when Gonzalez wanted to focus on other musical interests and he formed the western-soul band the Hacienda Brothers. During this time Dave Gonzalez liked to refer to the Paladins status as being “on hiatus.” Sadly, the untimely death of Hacienda Brothers band mate and longtime friend, Chris Gaffney in 2008, ended the Hacienda Brothers, which had released four albums. Then in 2010 the Paladins Reunited for a festival in Europe, which led to even more dates there in 2011. Also that year the band performed their first US date in seven years at the Ink and Iron Festival in Long Beach California. The next year they appeared at the 2012 Doheny Blues Festival and every year since, they have been headlining select European and US reunion shows.

Dave Gonzalez has been living in Austin Texas for the past nine years where he stays busy, not only performing, but also recording bands and producing records. Thomas Yearsley has done the same by running Thunderbird Analog Recording Studio and LUX Records in California. In between all of that Dave, Tom and drummer Brian Fahey have also gotten together to release their latest record titled New World, which was their first album in over 14 years. It’s a diverse collection of smoldering blues and roots rock, with a little honkytonk thrown in. This year the Paladins are also reissuing their first album originally released in 1986. This self-titled record became an instant classic and opened the eyes of the world to this amazing new rockabilly and blues sound that was coming out of Southern California. And that sound from the Paladins is stronger than ever, with their non-stop intensity and fine musicianship, which is only gotten better with age.

Don Leady and the Tail Gators

This Band is totaly awesome. If you enjoy Power Trio's then this is a Band for any true Music Fan. I own Three of their Albums, and believe me they are tuly worth checking out. If you have not done so already. The Tail Gators call their Music "Swamp Rock" and once you take a listening to their Southern Blend of Music, then you will understand why they call their Music by that name. They are from Austin, Texas. The Band Members are as follows: Don Leady - Vocals/Guitars/Fiddle/Lap Steel Keith Ferguson - Bass Gary "Mudcat" Smith - Drums/Background Vocals/Rubboard/Triangle Please give these Guys a listen to & be glad that you did, because you will want to grab your Darlin' by the arms and start swingin' her round & round to the beat of this very underrated yet very talented Band. Bye for now...Cheers!Update: BiographyCub KodaA Rock & Roll Band from Austin, TX, The Tail Gators feature former members of the Fabulous Thunderbirds and the LeRoi Brothers, with strong emphasis on grungy, guitar-driven blues-rock. ~ Cub Koda, All Music Guide I cannot find very much information about The Tail Gators, other than the above update. It's a real shame that these guys are so unknown to the Music World, because the are a very good Band. do not even know if they are still together or not. No they are not together anymore, they toured in dallas many times and got to enjoy their music,albums used to be available directly from alligator records .alas not anymore.Don has a page on myspace !www.myspace.com/donleadytailgators Their live performances were very enjoyable and access to their music is ,sad to say,limited !