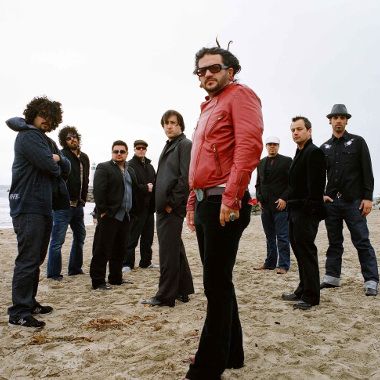 Ticket Price: $21 advanced / $24 day of show / $37 reserved loft seating (available over the phone or in person at out box office)

The B-Side Players are a 9-piece band part of a new movement in popular music. A band that honors the international cross-pollination that has always made music the universal language. They use any beat that catches their ear,regardless of geography or genre, to create a compelling, horn driven polyrhythmic groove.They continue exploring the multifaceted grooves of Latin America and the Caribbean, incorporating the sounds of
Cuba, Jamaica, Mexico and Brazil with the funk, rock, jazz and hip-hop rhythms of their homeland, dropping bits of Cumbia, Salsa, gritty street Samba, Son Montuno, Jarocho and Boogaloo into the mix.

The B*Side Players have been laying down their own inimitable latin global funk since they came together in 1994.Their incendiary live shows have defined them as local favorites with 10 San Diego Music awards. Meanwhile their albums showcase a band with restless musical intelligence, effortlessly blending genres to fashion their own forward
looking, latin flavored soul music. As an eight piece band the players are known for igniting crowds with their fierce rhythms and uplifting message of unity and consciousness. Meanwhile always keeping their focus on the political climate of the world and nation. The B-Side Players are a living and breathing cultural art experience for the mind
body and soul.

The Sleepwalkers (aka Los Sleepwalkers), are a San Diego based band that specializes in original music, with styles ranging from Rockabilly, Cumbias, and their own brand of down-home Rock & Roll. They are known for their lively and high energy performances that pack in live music venues throughout Southern California.

The Sleepwalkers latest cd Is called "Roots Rockin with The Sleepwalkers, and consists of mostly original songs written by the band. It continues their tradition of mixing original Rockabilly, Country, Cumbia and even some Surf into the mix. The result is "Puro Sleepwalkers... Puro Parti!

Los Sleepwalkers say their music comes from "El corazon" with much luv.