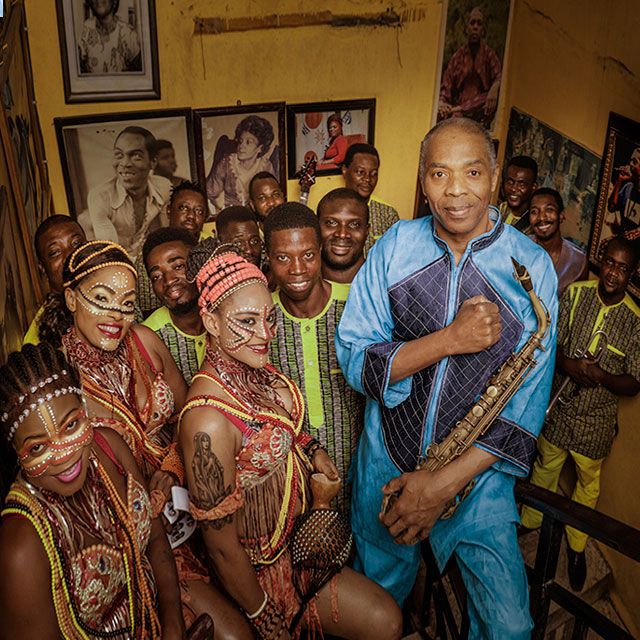 Ticket Price: $30 advanced / $35 day of show / $53 reserved loft seating (available over the phone or in person at out box office)

The indefatigable Femi Kuti never stops presenting his dynamic and colorful shows and committed political messages, whether from his iconic New Afrika Shrine in Lagos, or from all kinds of world stages and venues.

2021 allowed him to release the double album, Legacy + on Partisan Records which was so dear to his heart.

This box set containing his latest album "Stop The Hate”, together with the very first album "For (e) ward" from his eldest son Made Kuti.

Stop The Hate, radiates the unique Afrobeat sound that Femi has forged throughout his long career, affirming his sharply political convictions.

The song “PaPaPa” and this album which received rave reviews from the most cutting- edge and prestigious international media, has nominated at the 2022 Grammy Awards!

Femi can’t stop giving his long shows in front of his Lagos-addicted audience who always ask for more!

On May 2017 he was referred to in the Guinness world records with a single note held on a sax and set this records at 51 min 35 seconds.

It can sometimes be difficult to understand where he draws his energy as the countless fights for social justice he carries out are exhausting.

Fortunately, he met up with partners such as Global Citizen who defends the same causes and who recently broadcast his concert from The New Afrika Shrine as part of the 24-hour global concert they gave to the entire planet in September 2021.

Throughout the last few years, we have been able to watch Femi Kuti perform live from Cairo's stadium in front of millions of viewers, singing the official song of the African Cup of Nations, or hear him programmed alongside Jay-Z, Beyoncé and Ed Sheeran, while also seeing his name alongside heavyweights from the new Nigerian scene such as Davido, Tiwa Savage or Wizkid ...

Femi is widely in demand for many collaborations and that's how we were able to listen him on such different projects with Coldplay, the electro music producer Robert Hood, or the French Hip Hop band IAM.

For the happiness of all, Femi and his troupe, The Positive Force, plan to travel the world throughout the year 2022 with their new show, promoting Africa at its best and promising breathtaking performance, full of surprises.

Femi Kuti grew up in Lagos, Nigeria, where at 15, he started playing saxophone in his father, Fela's band, Egypt 80. He was thrown in the deep end when having to replace Fela as head of the band when Fela was arrested at the airport and jailed just before starting a US tour. From that day on he’s never looked back. In 1986 Femi formed his own band ” The Positive Force”. His first record was released in 1995 by Tabu/Motown, and has followed a long journey since where he continues to expand the diversity of his artistry on most of his albums and has received now received a total of six Grammy nominations after having released a dozen albums. In 1998, to honour his Father, he opened the “New Afrika Shrine” where the famous seven-day ‘Felabration” festival now takes place every year, around Fela’s October 15 birthday.

Elektric Voodoo is a "World Beat Rock & Roll" band from southern California that blends classic afrobeat, latin, rock & roll, psych, jazz, blues and many other influences into it's own unique genre that tastefully straddles the line between modern and vintage.
The band started when Scott Tournet (founding member of Grace Potter & The Nocturnals) started writing new material after leaving the Nocturnals. "Musically I wanted to try something a little different than what I'd done before. I wanted to make music with an undeniable rhythmic pulse but I really didn't want to make computer driven dance music as these past few years that seems to be much of what I hear." To accomplish that, Tournet tapped into the rhythms of west Africa, Latin, and World music for inspiration. What came out the other side though was not just a world music project.
Tournet's old band, The Nocturnals, had a quite a successful career which saw them write, record, and perform with The Allman Brothers, Billy Gibbons (ZZ Top), Taj Mahal, Dan Auerbach (The Black Keys), Robert Plant, Mavis Staples, Bob Weir, and many more. Through these experiences Tournet became schooled in song craft, soul, pop, blues, and classic rock & roll. So when he began writing songs to go on top of these powerful world rhythms the influences from his past shone through. What the listener is left with is a very unique sound that while immediately is very danceable, also offers innovation, song craft, and melody. Elektric Voodoo is a band that can excite and exhaust a Saturday night audience while also engaging and challenging more focused listeners.
Rounding out this powerful 7 piece ensemble with Tournet (vocals, guitar, harmonica) is Matt Bozzone (drums/percussion), Ty Kiernan (congas, timbales, percussion), Travis Klien (tenor sax, keyboards, percussion), Brad Nash (baritone sax, percussion) Willie Fleming (trombone, vocals, percussion), and Luke Henning (bass).