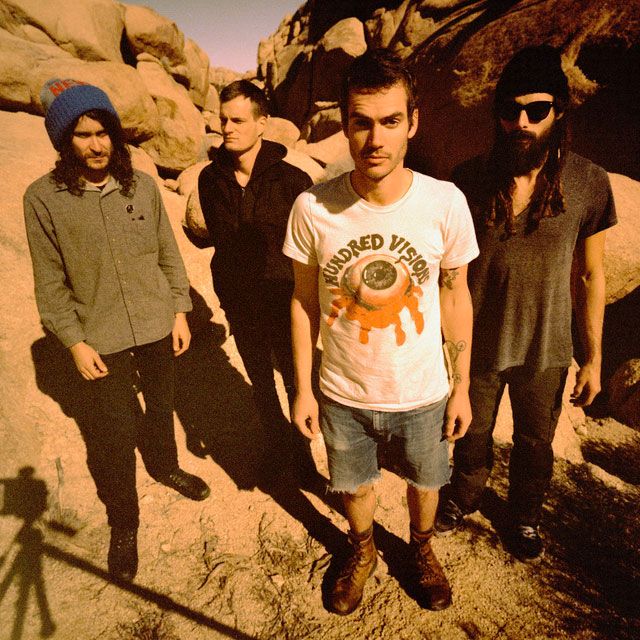 The Nashville trio thrive on contrast. Now six records deep into a tenure that began in 2012, they are unremittingly forward-looking.

Ticket Price: $18 advanced / $20 day of show / $32 reserved loft seating (loft seating is available over the phone or in person at our box office)

Nothing as the ideal

From the brimming light of the lead guitar on opener “Saturnine & Iron Jaw” to the mellow grunge unfolding in the finale “Rats in Ruin,” ​Nothing as the Ideal is a signature All Them Witches release, which of course means it sounds like nothing they’ve ever done before.
The Nashville trio thrive on contrast. Now six records deep into a tenure that began in 2012, they are unremittingly forward-looking, and while signature elements can be found throughout Nothing as the Ideal – from guitarist Ben McLeod’s prog-tinged explorations to the slacker-soul vocals of bassist Charles Michael Parks, Jr., to the restless energy and rhythmic nuance in Robby Staebler’s drum patterns – it is also their most experimental work to-date.

But contrast is the key: Tape loops coincide with unplugged minimalism. They recorded it in a strange place with a familiar producer. It’s their heaviest album marked by their broadest atmospheres, intimate and pummeling. It is unquestionably theirs even as it will no doubt engender ownership in anyone who hears it.

Nothing as the Ideal might forever be known as “the album All Them Witches made at Abbey Road.” Fair enough. You don’t record in a legendary studio surrounded by mics The Beatles used, sitting on the bench where John Lennon tracked the acoustic guitar for “A Day in the Life” without acknowledging that history. There’s no getting away from it.

Where ​Nothings as the Ideal triumphs, however, is in making that space and that history the band’s own. Working with Mikey Allred, who previously produced 2015’s New West label debut, Dying Surfer Meets His Maker​, and has done other mixing and mastering along the way, All Them Witches not only did justice to the moment they were capturing – the sheer adventure of being there, doing that thing – but answered the call of their inspiration as they always do.

It wasn’t supposed to be that way. The idea was to take time, do it themselves. But after spending the early part of 2019 constructing a studio in a church outside Nashville where Staebler was living and writing, writing, writing, the band came up against the deadline of a 35-date European arena tour with Ghost and had the single “1×1” to show for it. They put that song out, did a video, and after the tour, redirected their purposes. With the momentum of playing every night behind them, ​Nothing as the Ideal​ at last began to take shape.

Abbey Road might not have been the plan, but with the harder deadline of recording dates locked in, All Them Witches were able to focus more clearly. It wasn’t about applying pressure, but about doing what best served the songs. With Allred as the trusted party at the helm, they succeeded in crafting a defining moment for who they are as a band, with each player’s personality coming together to create a fluidity that is unique unto them.

Whatever they’ve done in the past, whatever they’ll do next, ​Nothing as the Ideal epitomizes the literal and figurative journey All Them Witches have made, and it is to be treasured all the more for that.

Blackwater Holylight, as the name suggests, is all about contrasts. It’s a fluid convergence of

sound that’s heavy, psychedelic, melodic, terrifying and beautiful all at once.

As a heavy band, their songs aren’t anchored to riffs, but rather riffs come and go in waves that surface throughout the band’s meditative, entrancing songs. It’s a hypnotic sound, with orchestral structures that often build tension and intrigue before turning the song on its head — not by simply getting louder or heavier, nor by just layering elements. They expertly subvert the implied heaviness of a part, dissecting it and splaying the songs guts out to seep across the sonic spectrum.

Now, having toured together extensively following the band’s wildly-successful breakout self- titled debut in 2018, Blackwater Holylight has honed their sound and identity to a powerfully captivating beast. Their live set is all about the slow build, seeming to combine the melodic tension of early Sonic Youth crossed with the laconic fever-dream blues of the first Black Sabbath album, and wiry experimentation of post-punk and krautrock.

The lineup on this album is Allison (Sunny) Faris (bass/vocals), Laura Hopkins (guitar/vocals) and Sarah McKenna (synths), with new guitarist Mikayla Mayhew and drummer Eliese Dorsay fleshing out their sound in exciting ways.

“The process of this album was vastly different from our first record,” says Faris. “One, because we recorded it over the course of a few weeks, whereas the first record was over the course of about a year. And two, this album was a true collaboration between the five of us. Each of us had extremely equal parts in writing and producing, we all bounced ideas off each together, and we all had a say in what was going on during every part of the process.”

“One of our favorite things about this album is that because it was so collaborative, we didn't compartmentalize ourselves into one vibe.” She continues. “It’s heavy, psychedelic, pop, shoegaze, doom, grunge, melodic and more. The whole process was extremely organic and natural for us, we were just being ourselves.”

Veils of Winter opens with fuzzed-drenched, drop-tuned bass and baritone guitar leading a dirge riff on “Seeping Secrets.” Faris’ lilting and funereal vocals drop in, adding to the mournful atmosphere until a short turnaround progression hints at changes to come, as Faris and Hopkins harmonize eerily and the tune suddenly turns into a krautrock charge. “Motorcycle” kicks off deceptively with a heavy grunge riff building up for about 40-seconds before the song abruptly shifts gears into a synth-led post-punk harmony, sounding something like Lush meets Syd Barrett era Pink Floyd. “Death Realms” is perhaps the poppiest track, based around soaring shoegaze guitars and interwoven light vocal harmonies. Soft piano notes, occasional woozy whammy bar dives and a driving tom-tom beat solidify its hooks. “Spiders” is a creepy- crawly guitar riff and counterpoint keys, while “Moonlit” explores prog-structures with a shredding guitar solo crescendo. The penultimate track, “Lullaby” is exactly that, a lulling, expansive tune exemplifying Blackwater Holylight’s genre smashing sound as it subtly moves across a vast sonic landscape atop a hypnotic 6/8 beat and repetitive 3-note motif. Throughout the album, their songs shirk traditional verse-chorus-verse structure in favor of fluid, serpentine compositions that move with commanding grace.