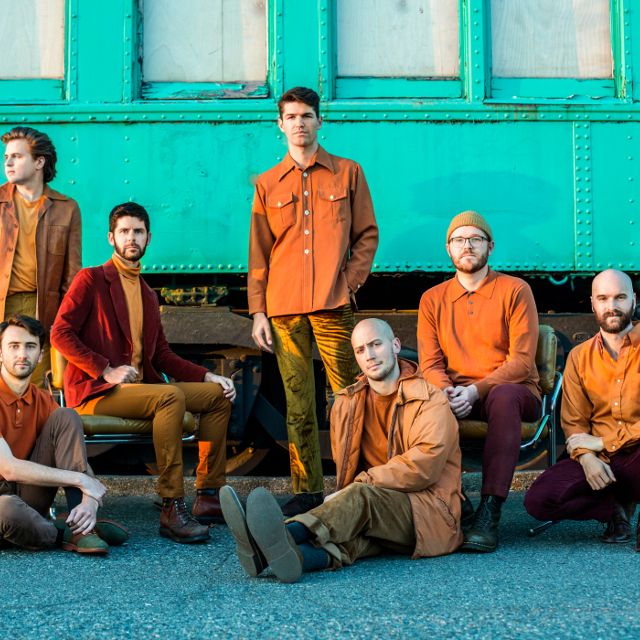 The electrifying seven-piece ensemble melds vintage rhythm & blues with classic pop storytelling, and is acclaimed by KEXP as “one of the most exciting and joyous acts to emerge in recent years,” following the release of their 2nd LP, "The Dip Delivers".

Ticket Price: $17 advanced / $20 day of show / $30 reserved loft seating (loft seating is available over the phone or in person at our box office)

Hailing from Seattle, The Dip is an electrifying seven-piece ensemble that melds vintage rhythm and blues with classic pop storytelling. Acclaimed by KEXP as “one of the most exciting and joyous acts to emerge in recent years,” the band features frontman Tom Eddy’s compelling vocals over an effortlessly deep pocket and energetic melodies from the three-piece Honeynut Horns. Hard-hitting but sensitive, The Dip draws inspiration from the musical roots of decades prior while sounding undeniably relevant today. Following the organic buzz of the 2015 debut, the band arrived on the international stage with their 2019 sophomore full-length, The Dip Delivers. Buoyed by the hit single “Sure Don’t Miss You,” the album was entirely recorded and mixed by the band in their own studio and dishes out a nourishing dose of stylistic and sonic variety. Following an ambitious 2019 that took the band throughout North America, Europe, and Japan, The Dip will captivate audiences with brand new music to complement their vibrant live shows and solidify their reputation as one of the most engaging acts on the road today.

Jennah Bell is an Oakland-grown singer/songwriter whose ravenous musical curiosities inspired her own creative wonderland; her quirky songwriting and undefinable genre is a direct product of her proud Bay Area roots. As the architect of all aspects of her musical endeavours, Jennah pulls from a colorful palette of Folk, Soul, R&B, Hip‐Hop, and Bluegrass.

Jennah was selected by the Grammy Foundation to participate in the summer program under the tutelage of Jimmy Jam, Paul Williams, and David Foster, all of whom embraced her unorthodox writing style. This experience encouraged Jennah to further her studies at the prestigious Berklee College of Music, where she immersed herself in a community of artists, and found much inspiration in her peers and professors. Included in her supporters is the legendary Paul Simon who extended his expertise and mentorship to the burgeoning artist.

In 2011, Jennah released her first self-produced EP, the experimental “Early Bird,” and set out for New York City where, she’s been warmly welcomed into NYC’s renowned music scene. Since moving to New York, she has performed at The 2012 BET Awards as a independent artist, CMJ’s Music Marathon, SXSW Music Festival, Blue Note Jazz Festival, the main stage of The Roots Picnic, and the prestigious 2013 North Sea Jazz Festival in Rotterdam, where she received a standing ovation. She released a 3‐piece acoustic set “Live at Mother,” EP December of 2012 which was profiled on Okayplayer.com. She has shared the stage with artist such as Hiatus Kaiyote, Cody Chesnutt, Gregory Porter, Alice Smith, KING, and Eric Benet. Bell is currently working on her debut studio album titled, “Anatomy” with contributions from Grammy winning mix engineer and producer, Russell Elevado, Neal Pogue -- and multi‐Grammy winning songwriter, musician and multi‐platinum producer James Poyser.

Haunting as the blues, gritty as rap verse, and enchanting as only folk can be, Jennah Bell is the sum of music’s best parts.